Auschwitz-Birkenau and other camps in Nazi-occupied Europe

After the invasion of Poland, Germans, relying on the camps that had been operating in the Third Reich for several years, began to set up concentration camps on Polish soil. At the same time, they started to deport some Polish prisoners to the camps in Germany. The first concentration camp in occupied Poland, KL Auschwitz in Oświęcim, was established in May 1940. It was created in connection with the mass arrests of Poles in order to suppress the resistance movement.

Auschwitz-Birkenau was the largest of the 29 German Nazi concentration and extermination camps operating during the war in the Third Reich and in the Nazi-occupied Europe.

The German concentration camps after 1939 were also a place of extermination and genocide of children. As a child, Janina Luberda-Zapaśnik, one of the founders of the Patria Nostra Association, was also a victim of the German death industry. None of her four siblings survived the war. Many children died before transports reached the camp, others died in gas chambers or were murdered with phenolic injections. Newborns born in the camp or who came to the camp together with their parents also stayed there. All inmates detained in the camps were condemned to hunger, severe diseases, devastating work, and some were additionally subjected to pseudo-medical experiments.

In the following years, the authorities of the Third Reich extended the tasks of concentration camps. Since 1942, when Germans began to implement the program of extermination of Jews (the so-called “Final Solution of the Jewish Question” – “Endlösung der Judenfrage”, most often referred to as the Holocaust), the Jewish population from all over Europe began to be directed to Auschwitz. After the Jews arrived, they were mass murdered with cyclone B or flue gas. Ca. 9 thousand people were deprived of their lives per day. According to the latest findings, over one million Jews were murdered in the camp (by comparison, the second largest nation were Poles of whom 75 thousand were killed, followed by 21 thousand Gypsies, and 15 thousand Soviet prisoners of war). In total, Germans murdered at least 5 million 500 thousand European Jews, including from 2.7 million to 2.9 million Polish Jews.

Apart from concentration camps, where the extermination program was carried out, in 1942 Germans established death camps in Chełmno nad Nerem, Bełżec, Sobibór and Treblinka. The crew of these camps consisted of Gestapo and Sonderkommando SS officers. The aim was to destroy the Jewish population of Europe. They also murdered gypsy people, Soviet prisoners of war and Poles who helped Jews. In 1942-1944, transports of European Jews from the Protectorate of Bohemia and Moravia, Slovakia and Hungary, as well as France and Holland were sent to death camps. Most of them were sent to the death camp of Auschwitz-Birkenau.

The fact that the historically erroneous and, for Poles, offensive concept of “Polish camps” still appears in various statements and publications has resulted in the Institute of National Remembrance creating the Internet portal “Truth about camps” (http://truthaboutcamps.eu/). 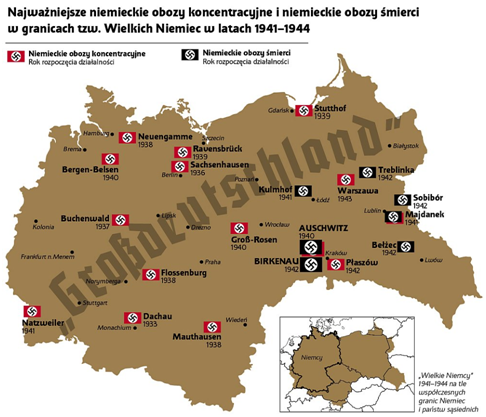 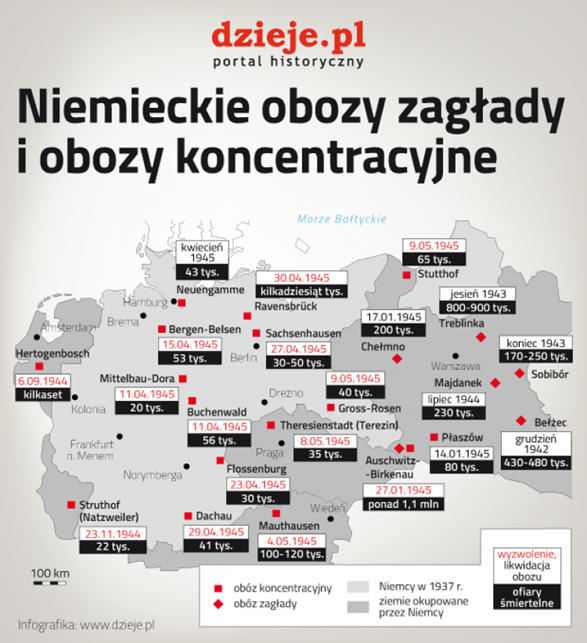 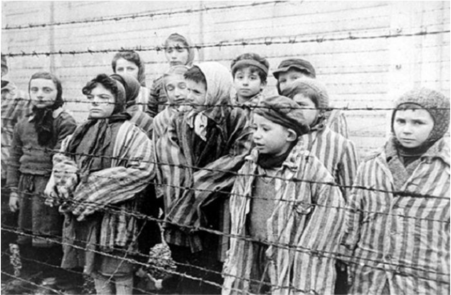 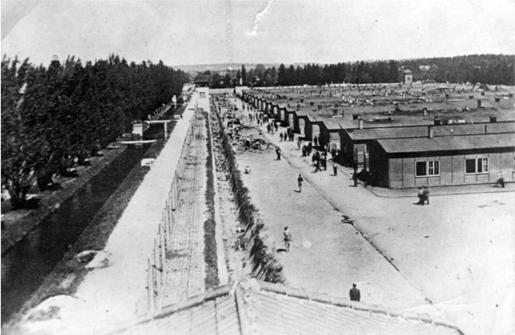