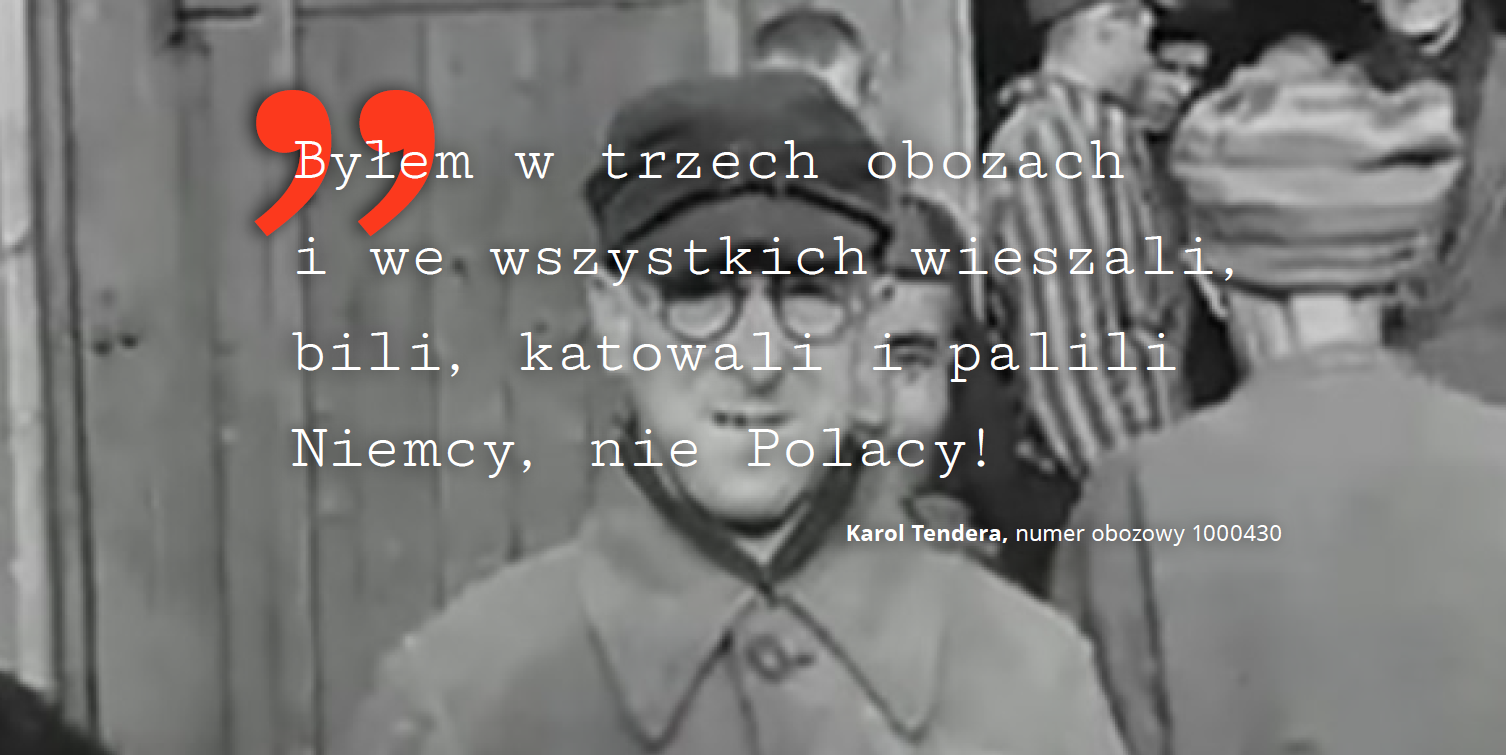 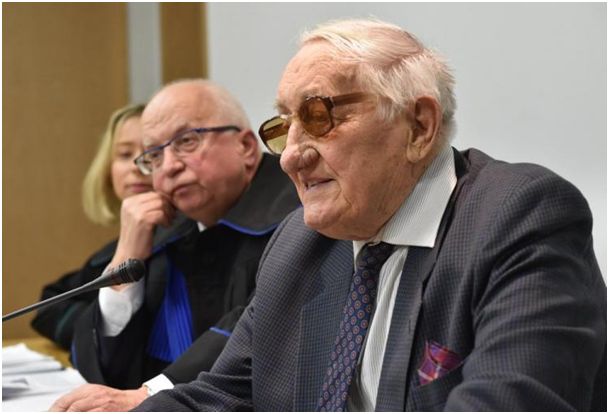 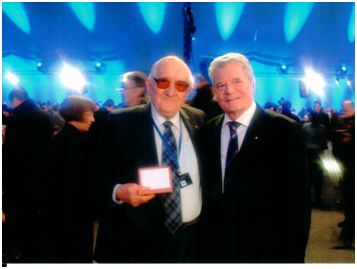 I was detained in three camps. In all of them those were Germans, not Poles, who hung, beat, tortured and burnt other people. One cannot allow them to shout us over, to say it was a mistake, I will not accept or agree to that,

said Karol Tendera in court, during his process against ZDF, a German TV station.

Karol Tendera was born in Kraków in 1921, in an artistic family. His father was a musician, his mother – a painter. During WWII he attended the Kraków Mechanical School. On March 2, 1940, he and his schoolmates were transported to Hannover and assigned to forced labour in Max Mueller-Hann Flugzeug Werke, a plane factory. Karol was 19. Two years later he managed to escape. He returned to the occupied Kraków. Yet, it was no longer the city from his memories. There were German street names, swastikas, and a sense of fear caused by street roundups.

Tendera was arrested on January 19, 1943 by an ununiformed Gestapo officer. He was interrogated in Pomorska street and accused of IDs falsification. When he refused to plea guilty, German officers responded by beating him on the head with their elbows. The effects of the attack endure still. He lost hearing in one of his ears and needs to use a hearing aid. From there he was transported to the Montelupich Prison. Years later, he still recalled how, after every operation carried by the Kraków Underground Fighters, Gestapo officers would gather the inmates in the hallway and count them. The selected ones were transported to Krzeszowice where they were shot to death.

Tendera was imprisoned in Auschwitz by Germans on February 5, 1943. Since then he no longer had a name. He was then number 1000430. 70 years later, Karol still remembers the speech that greeted him and other inmates in the camp:

„You came to a German concentration camp. This is not a nursing home, but a heavy labour camp. You will not endure this for long. Jews are allowed to live 2-3 weeks at most, priests and Gypsies – a month and a half, the rest of you – three months. After that you have to make room for others. If you don’t like it, you can force yourself onto the wires even today. Tomorrow you’ll leave this place via the chimney.”

Several months later a Blockführer read the numbers of 15 inmates. Karol’s was one of them. The entire fifteen was sent to the camp’s hospital and used for experiments. Those experiments were carried out by Josef Mengele, known among prisoners and the Angel of Death. Inmates were given some gray-brown fluid shots. Their actual contents are unknown. The experiment resulted in death of some of the prisoners. Those who survived returned to work. After some time they were sent to Birkenau.

In Birkenau, Karol Tendera lost his faith and will to live. The living conditions were so hard that prisoners died en mass. Corpses piled in front of their barrack, like trash. still cannot forget a scene he witnessed:

A new transport arrived. Men were rushed to work. Mothers with children and the elderly remained. Some SS officers put two poles in the ground and tied a string between them. Children were told to walk under it. Those whose head touched the string were sent to work, others – to the gas chamber. Karol can still hear the cries of the mothers and their kids.

Tendera survived only with the help of his fellow inmates who enrolled him into the camp’s resistance movement. It was created by Witold Pilecki. In October 1944, Russians were approaching the city of Katowice. Germans forced prisoners into the Death March heading deep into the Reich. Karol spent his last six months of the war in Leitmeritz concentration camp (today Litomierzyce in the Czech Republic).

He was released only on the last day of the war. Tendera came to a large farm where Czechs were enrolled as slave workers. Fearing Russians, the farm’s director, a German, committed suicide together with his family. Two Germans, running from Russians, asked for help. In return for civilian clothes, one of them gave Tendera a leather wallet. He claimed it was given to him by Adolf Hitler. Today the wallet is weathered. Karol used to carry it with him after the war.

A German woman who lived in the camp offered Tendera the hand in marriage of one of her daughters, as well as work, and studies at the Berlin University. Had Karol accepted her proposal he would not return to Poland.

Alas, he came back to Kraków, and graduated from Kraków University of Science and Technology. He held the post of the CEO of a large construction business up to his retirement. Currently, he presides over the club of the KL Auschwitz German Nazi Concentration Camp former inmates. 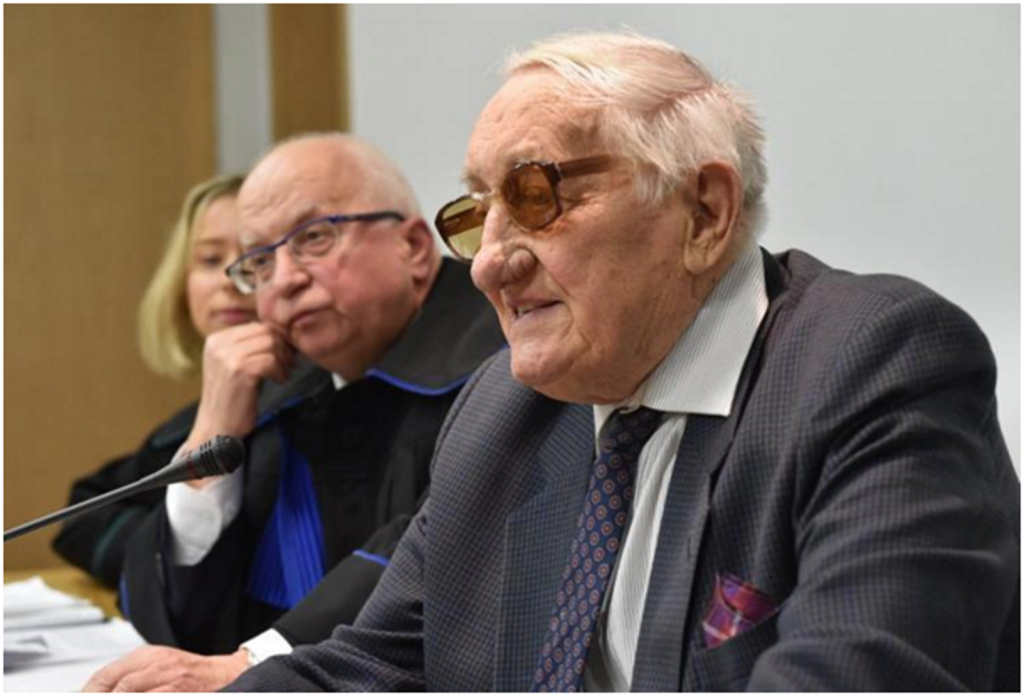 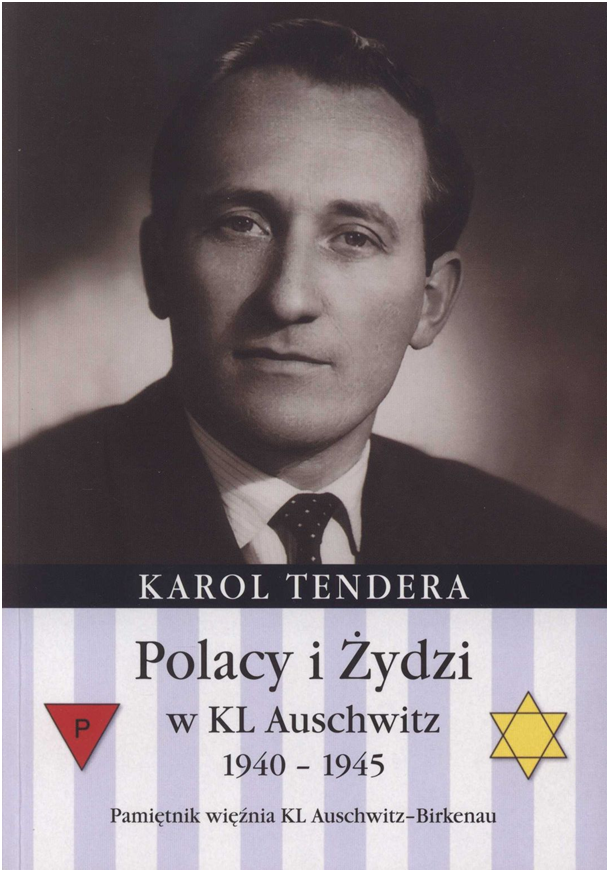 Tendera wrote about his war experiences in his book „Polacy i Żydzi w KL Auschwitz 1940-1945”, published by Wydawnictwo Jagiellonia SA.”

As a permanent speaker at the Center for Dialogue and Prayer in Auschwitz, he meets with foreign visitors from Germany, Norway, and Japan. In many interviews Tendera mentioned he did not feel any hatred to Germans. He sued the German TV station for the sake of the truth, not for the sake of revenge for the injustices done to him. In Karol’s salon, in addition to photographs of his parents, there is also a commemorative shot of him with Joachim Gauck, the President of Germany, taken on the 70th anniversary of the liberation of Auschwitz. Karol says it is a picture of two friends. He claims that those he resented are dead.

As a result of the numerous appeals from ZDF television, Karol is still waiting for an apology for the use of the phrase “Polish death camps” by German journalists. Tendera is physically fit, but is already 94 years old. He would like to see a positive outcome of the case. After one of the hearings, he even said:

In December 2016, the Court of Appeal in Kraków ruled that the German television should apologize to Karol Tendera. A relevant text was to be displayed on the homepage for thirty days. However, the German broadcaster cleverly disregarded the order by publishing a link to “Apology to Karol Tendera” and a small text in the form of a graphic at the bottom of the page. According to Karol Tendera’s representatives: Lech Obara and Szymon Topa, attorneys from Olsztyn, it was an attempt at manipulation and evasion of responsibility.

Therefore, in January 2017, the court in Mainz was asked to declare that ZDF must fully comply with the judgment of the Kraków court. The court granted the application, but the German station did not want to accept it. ZDF’s lawyers challenged the decision of the court in Mainz before the Higher National Court in Koblenz.

By order of 11 January 2018, The Higher National Court of Koblenz finally dismissed ZDF’s complaint against the decision of the National Court of Mainz, holding that the judgment of the Court of Appeal of Kraków was enforceable in Germany.

I was detained in three camps. In all of them those were Germans, not Poles, who hung, beat, tortured and burnt other people. One cannot allow them to shout us over, to say it was a mistake, I will not accept or agree to that,

said Karol Tendera in court, at the beginning of the trial against ZDF, a German TV station.

Karol Tendera and his plenipotentiaries, as well as members of the Patria Nostra association, hoped that ZDF would not fight any further on such a sensitive issue. It turned out otherwise. The German television network appealed against this ruling as well, bringing an action before the Federal Court of Justice in Karlsruhe, the highest judicial institution in the German legal system.

I am outraged by the activities of the ZDF television. I treat the appeal against the decision of the Higher National Court in Koblenz as an act of hostility and arrogance,

The decision of the Federal Court of Justice in Karslruhe will finally close the proceedings on the implementation of the judgment of the Court of Appeal in Kraków.

A meeting between former Auschwitz-Birkenau prisoner Karol Tendera and German President Joachim Gauck on the anniversary of the liberation of the camp. 27 January 2015 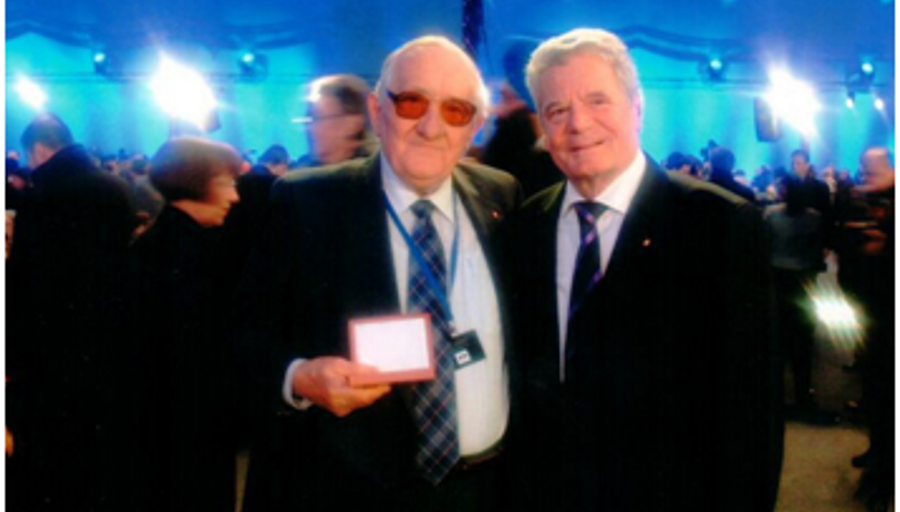 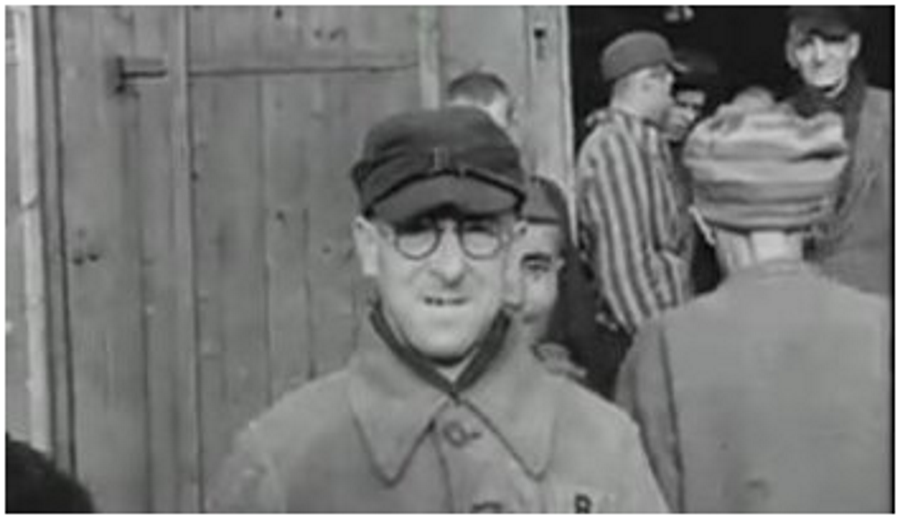 The Polonia Institute, 5 parts completed in cooperation with TV Radom and the Kraków branch of the Institute of National Remembrance (IPN)