Lech Obara was born on 6 December 1950 in Kraśnik.

He studied law at the Maria Curie-Skłodowska University in Lublin. In the early 70’s he moved to Olsztyn. He was a legal adviser to the Provincial Council of Trade Unions. From 1984 he worked as the head of the legal intervention department in the editorial office of one of the most popular newspapers at that time – Dziennik Pojezierza.

In the early 1990s he successfully ran his own business. In 1997, as soon as it became possible in Poland, he established his own law firm. At the beginning, its seat was a room rented in the Olsztyn Sanitary Inspectorate.

Obara helped Polish contractors to recover debts in goods from Russians. When a heat and power plant took pipes from Poles, but did not pay because it did not receive any heating payments from the steelworks, Lech Obara settled that the steelworks repaid its debts to the heating plant by sending steel to Poland in exchange for pipes.

His first case known all over the country, evoking a lot of emotions and described by practically all the media, was a case of “Biedronka”, concerning exploitation in a chain of stores. Suppliers came to the law firm with complaints that the discount did not pay for deliveries, but issued invoices for alleged promotional campaigns carried out in stores. Soon, Biedronka’s employees joined, complaining about their work beyond strength and working time. It was then that Lech Obara for the first time publicized the case in the national media, successfully conducted numerous court battles, and participated in the establishment of Biedronka Stop The Exploitation Association.

Another important topic addressed by Lech Obara’s law firm are the claims of so-called late displaced persons. That was a massive attempt to recover the property by the owners and heirs of people who left Poland in the 1970s and 1980s. The paths were paved for them by Agnes Trawny, who left for Germany and became a German citizen, and then, after many years of fighting, she regained her estate in Narty. The Patria Nostra Association, headed by Lech Obara, at that time announced the preparation of legislative changes, which were to settle the claims of late displaced persons and their heirs once and for all. The Association also made an appeal to protect local governments from those claims.

Next, the counsellor undertook to fight against bailiffs who abused their power and position. The first loud case was the conviction of Piotr K., a bailiff from Szczytno and Waldemar S., an expert, for bidding property of a family from Kolonia Rozoga far below its value.

Unlawful practices used by the bailiff’s office of Jarosław K. from Łódź also became widely publicized throughout the country. That was not only the most medial case of Radosław Zaremba, who lost a tractor for a neighbour’s debts. Assessor Michał K., who seized the tractor, may be imprisoned for up to 10 years.

Katarzyna Walkowska from Sieradz was also a victim of that office. She also lost her property, even though she was never a debtor.

The case of Sebastian Sz, a bailiff from Działdów, who violated the provisions of the enforcement proceedings in the execution procedure against Wiktor Chrusciel’s assets, was also very loud. That bailiff has already been successfully sentenced to absolute imprisonment.

One of the most important activities of Lech Obara is the fight against false statements such as “Polish death camps” appearing in foreign media, initiated by him in 2009. The law firm represents, among others, Karol Tendera, Janina Luberda-Zapaśnik and Zbigniew Osewski in their fight against leading German media and does it entirely pro bono.

Obara, as President of the Patria Nostra Association, presented to the Ministry the need for legal recognition of dignity and national identity as a personal good and for a faster legal route for cases in which he represents former concentration camp prisoners.

The second path of the Patria Nostra Association is the creation, based on the experience of both the lawyers of the law firm and members of associations such as “Stop The Exploitation”, of a centre for the rights of the excluded. It is about effective help for people affected by the lawlessness of execution or usury.

For his actions, Lech Obara was awarded the title of Pro Bono Lawyer. 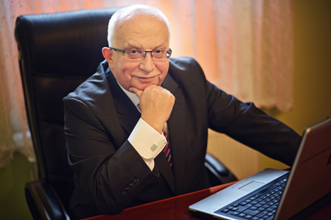