In 1933, after Adolf Hitler came to power, the first concentration camps were established in Germany. They were supposed to serve the purpose of isolation, slave exploitation
and extermination of people recognised by the Nazis as enemies of the state and the German nation.

The first concentration camp in Germany was established on March 22, 1933 on the orders of Heinrich Himmler in Dachau, Bavaria, near Munich. 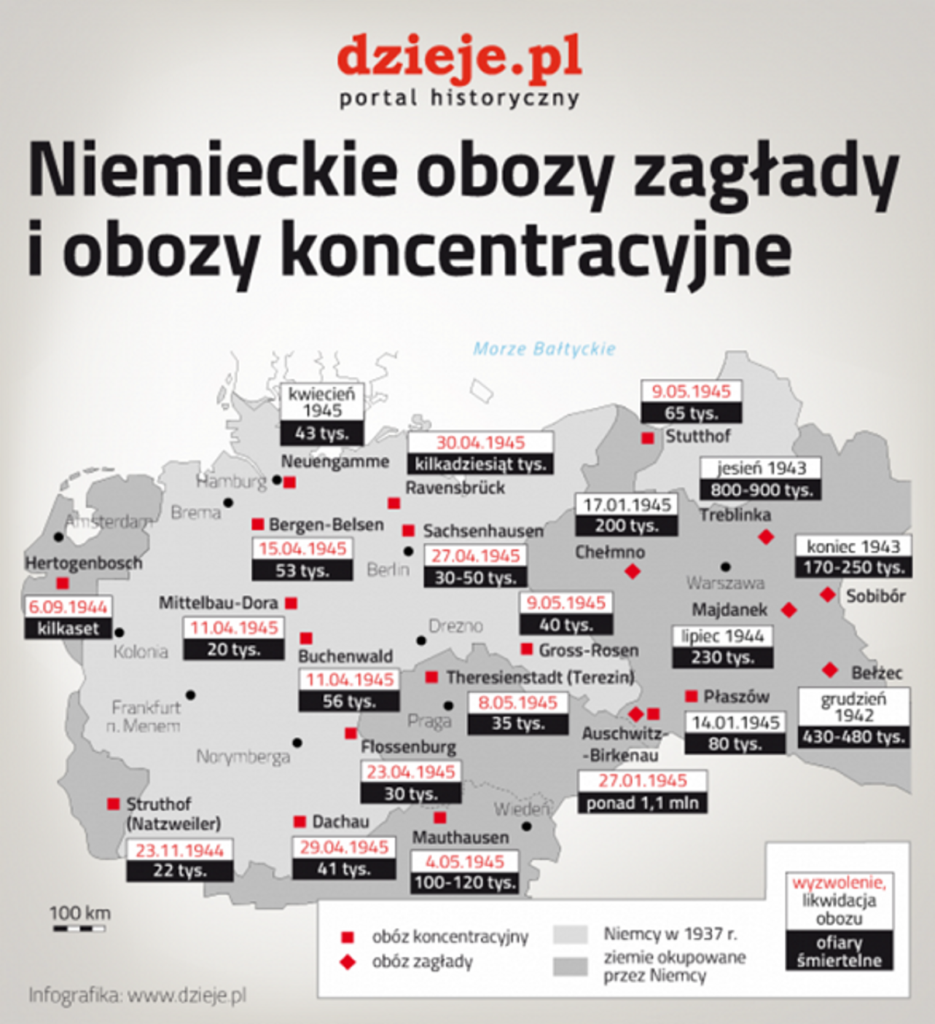 The first prisoners in Dachau were political opponents (including communists), Jews, homosexuals, Jehovah’s witnesses, and criminals. After 1939, the camp was inhabited by inmates from all countries of the conquered Europe. It was also the main center of extermination of clergy. The first mass transports of Poles to Dachau took place in the spring of 1940. Among the approximately 250 thousand prisoners who passed through the camp between 1933 and 1945, there were ca. 40 thousand Poles. More than 10 thousand of them lost their lives. It is estimated that between 1933 and 1945, about 150,000 prisoners were murdered or died in the Dachau camp. In Dachau, pseudo-medical research was also carried out and death sentences were executed by shooting or hanging. The camp functioned until liberation, that is until April 29, 1945.

Quickly other concentration camps modelled on KL Dachau were set up in Germany: Buchenwald, Sachsenhausen, Flossenbürg, Neuengamme, Mauthausen-Gusen, Hartheim near Linz, Mittelbau-Dora and Bergen-Belsen. The first prisoners of the camps were German communists, opponents of the Third Reich, criminals, and after 1939 Poles and other citizens of the conquered Europe. In the camps there was a rule that man was a number without value. Prisoners were subjected to inhumane treatment. Pseudo-medical experiments were carried out here to implant tuberculosis bacteria to prisoners (including children). In some of them (Hartheim near Linz) there were gas chambers, in the initial period used to murder disabled and mentally ill Germans, and from the human skin of the killed prisoners haberdashery for SS officers was manufactured (Buchenwald).

In the Ravensbrück camp, founded in November 1938, near Fürstenberg in Brandenburg, Germany, pseudo-medical experiments were carried out on female prisoners, mainly young Polish women, by cutting out parts of their leg bones. Bone and muscle surgery was performed on 86 female prisoners, including 74 Polish women, many of whom survived the war and were crippled. Between 120 and 140 Roma and Sinti women were sterilized. Bacteria were also injected into female prisoners.